“ Scaling up bioenergy use will require advanced technologies such as gasification, Fischer-Tropsch processing, hydrothermal liquefaction (HTL), and pyrolysis. These pathways could deliver several final energy carriers starting from multiple feedstocks, including forest biomass, dedicated cellulosic feedstocks, crop residues, and wastes. While potentially cost-competitive in the future, pyrolysis, Fischer-Tropsch, and HTL are not currently cost-competitive, and scaling-up these processes will require robust business strategies and optimized use of co-products.”

“ Besides BECCS1, biofuels production through pyrolysis and hydrothermal liquefaction creates biochar, which could also be used to store carbon as 80% of the carbon sequestered in biochar will remain in the biochar permanently. In addition to its ability to sequester carbon, biochar can be used as a soil amendment. ” 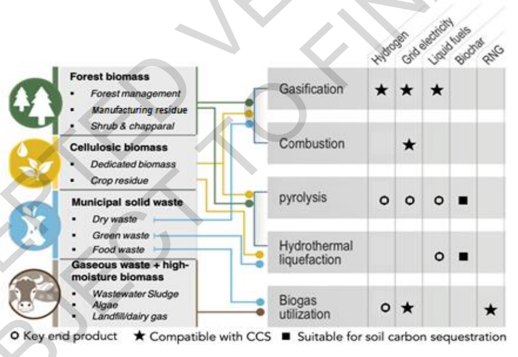 “ The costs of hydrogen production from biomass are somewhat higher than, but comparable, to that produced by natural gas reforming with CCS. Further, the incremental costs for incorporating CCS in this process are less than 5% of the levelized costs in some cases, since the gasification route creates a high-purity stream of CO2.

While these processes have fewer ongoing prototypes / demonstrations, the costs of biomass-based hydrogen (with or without CCS) are substantially cheaper than that produced from electrolysis utilizing solar/wind resources, even though electrolysis costs are dropping. ”

" Biochar is produced by heating organic matter in oxygen-limited environments (pyrolysis and gasification). Feedstocks include forestry and sawmill residues, straw, manure and biosolids. When applied to soils, biochar is estimated to persist from decades to thousands of years, depending on feedstock and production conditions. Biochar systems producing biochar for soil application plus bioenergy, generally give greater mitigation than bioenergy alone and other uses of biochar, and are recognised as a CDR2 strategy. "

" Besides CDR, additional mitigation can arise from displacing fossil fuels with pyrolysis gases, lower soil N2O emissions, reduced nitrogen fertiliser requirements due to reduced nitrogen leaching and volatilisation from soils, and reduced GHG emissions from compost when biochar is added. "